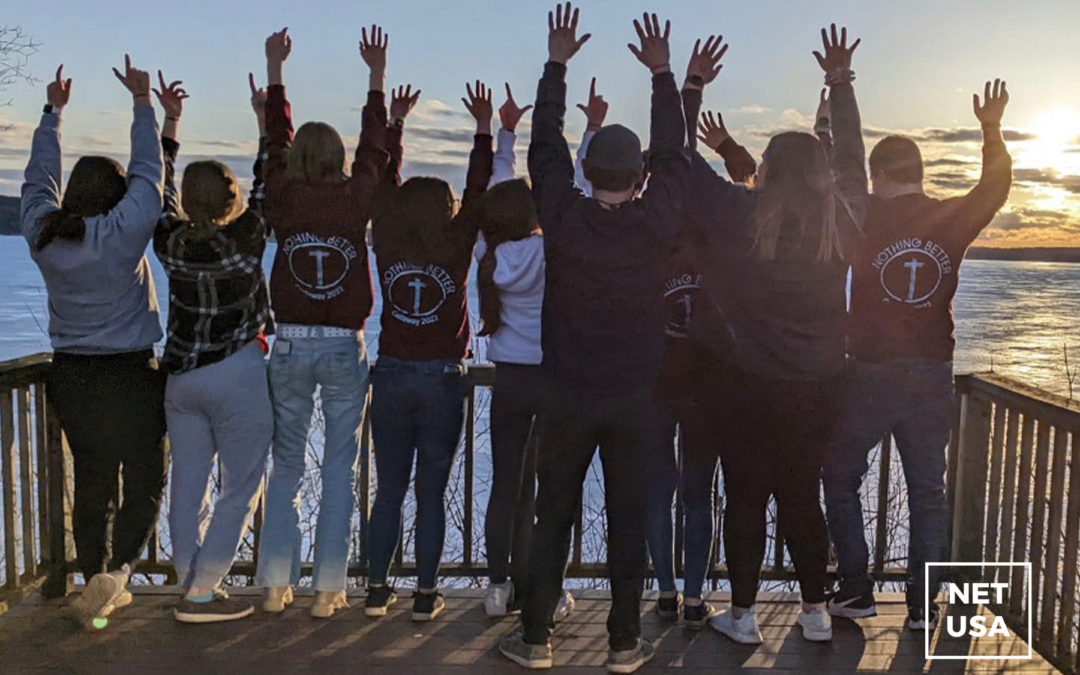 Maybe you don’t feel God right now. Maybe you do. But whether you served with NET two years ago or twenty, God is still just as close to you today as He was at your commissioning mass. He is still the God that you worshiped in team prayer. Jesus’ love you shared through the dramas, talks, and crazy AMEs. The love you experienced in your sisterhood and brotherhood is still 👏 right 👏 here 👏

As I prayed about what God wanted me to share in this blog post, I truly believe that He wants you to know that He is still the unchanging God who called you into the mission field, and He is still, in fact, calling! The mission field looks a little different (ok, maybe a lot different), but the commission remains the same; “Go, therefore, and make disciples of all nations.” In a world of TikToks, SnapChats, and pandemic problems, we are still called!

For those of us who have been called into the vocation of marriage, the idea of hopping into a van with only other adults (no kids?!) and getting free meals from host families (not having to cook and clean?!) can sound like a vacation at times! (It’s ok to laugh, I have kids too!) Sign me up, Dave! I’m coming on for a third year!!

All jokes aside, what was a radical call to NET at age 18 was only to prepare me for the even greater call to my life as a wife and mother. NET deepened my relationship with God so that I could be right here, 13 years later, realizing an even more radical call; to embrace the daily diapers, to chauffeur kids to 6,000 different sports and activities, to saying yes to the challenges of loving another person fully in marriage… Whew. Yep. That third year of NET sounds pretty great some days, and it’s ok to admit that! 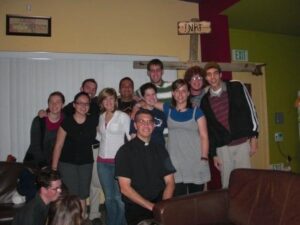 It’s also ok to admit that maybe we’ve fallen away; Scripture addresses this. Sometimes we can feel like the first son in the recent Sunday Gospel reading of the prodigal son. There was a retreat talk about the prodigal son that existed when I was on the road. Maybe you’ve even given this talk. Regardless, we know how it goes, and we have walked in those shoes. We’ve taken the grace that was given to us, taken our inheritance, and absolutely wrecked it. We’ve been in relationships that we knew weren’t good for us. We’ve allowed ourselves to live in habits of sin and addictions that keep us from God. We may even get to a point where we’ve stopped praying altogether because there’s so much shame in us. Even though we know God already knows, we still try to hide.

If that is you right now, wondering how you got here….. get up!!! Go back to your Father’s house! He is waiting for you and is dying for you to know the vastness of His mercy! It is literally beyond comprehension how far His mercy reaches, but it is real, and it’s yours. 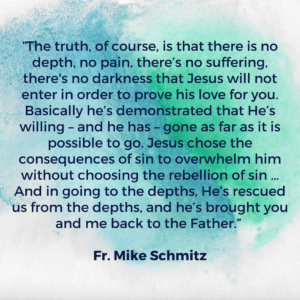 “The truth, of course, is that there is no depth, no pain, there’s no suffering, there’s no darkness that Jesus will not enter in order to prove his love for you. Basically, He’s demonstrated that He’s willing – and he has – gone as far as it is possible to go. Jesus chose the consequences of sin to overwhelm him without choosing the rebellion of sin …And in going to the depths, He’s rescued us from the depths, and he’s brought you and me back to the Father.” Fr. Mike Schmitz

On the other hand, maybe you’re in the shoes of the second son. The one who stayed. The one who was faithful to the Father. Who continued to work for his Father’s Kingdom, day in and day out. Now before you dismiss this son because you think you know him, hold up because there’s a plot twist….

He needs mercy too! See, when his brother returned, it revealed some deep resentments growing in his heart. Not only resentment, but a revelation that perhaps all along he hadn’t been working out of love for the Father, but rather, to earn the Father’s love. And when it was so freely given to this wild brother of his, he was left standing there saying, “ARE YOU KIDDING ME?!”

What can we learn from these two sons? Ask yourself:
What resentments are building in you? What judgments need to be released? Where is God trying to cover you in mercy while you turn away, saying, “Nah, it’s good, I got this!”

Romans 3:23 reminds us, “For all have sinned and fall short of the glory of God.”

Sons and daughters of God, brothers and sisters, He is still right here.

So don’t let resentment hold you back. Instead, I challenge you to get rid of anything that keeps you from fulling embracing the love of the Father. Destroy is and start clean, just like the lyrics of the song Burn the Ships say: 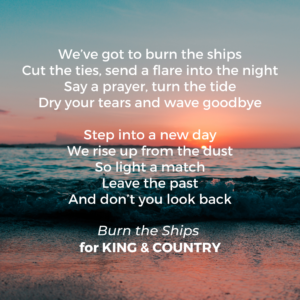 We’ve got to burn the ships
Cut the ties, send a flare into the night
Say a prayer, turn the tide
Dry your tears and wave goodbye

God is here, and He is still radically calling you. We are called to the Resurrection. We are also called to the Passion, so embrace the suffering because with God’s grace, it will bring us through death back to life, and life with Him is simply incredible.

You are in my prayers. May God bless you, NET alumn!